If one were to take its trailers at face value – not to mention some of the buzz that followed its premiere at Fantastic Fest last week– the new horror film Smile is primo Spooky Season fare. At first glance, it certainly looks like a kooky funhouse-ride movie, held aloft by ample, old-school jump-scares and personifying the kind of creepy, R-rated studio-horror picture that has become something of a rarity. While Smile does feature its share of jump-scares, they are not so conspicuous as to make the film stand out compared to other contemporary horror features. A couple of those big “BOO!” moments are very good, but most are average to forgettable, and one of the gnarliest was completely spoiled by the film’s trailers.

Ironically, the jump-scares are perhaps the least interesting thing about Smile, the feature debut of writer-director Parker Finn (“The Hidebehind,” “Parker Hasn’t Slept”). Although it occasionally dabbles in arch absurdity, Finn’s film is not the sort of enjoyable, disposable horror movie that punches your ticket, provokes some delighted screams, and calls it a day. Smile wants the viewer to deeply inhale its smothering atmosphere of advancing doom, to feel the proverbial walls closing in on its luckless heroine. It is a surprisingly intense, bleak experience, closer to The Ring or It Follows – in spirit, if not in the artistry of its execution – than to recent occult-horror dreck like The Grudge, The Turning, or The Unholy. And much like It Follows, Smile turns subtext into text: This is yet another Horror Movie About Trauma, albeit one that literalizes its themes in such a brutally explicit way that it almost qualifies as a bracingly novel version of the form.

Rose Cotter (Sosie Bacon) works as an attending physician at a psychiatric hospital in a gloomy, unspecified East Coast city. She is compassionate, committed, and voluntarily overworked, traits that the film unequivocally connects to a troubled childhood in which she witnessed her mother’s untreated mental illness culminate in suicide. One day, a panicked graduate student named Laura (Caitlin Stasey) lands in Rose’s care, insisting that she is being stalked by an evil presence. Laura claims that this entity, which is only visible to her, can take anyone’s appearance, living or dead, although it always manifests with a maniacal grin plastered on its face. Rose’s initial assessment is that Laura may be experiencing a psychotic episode, possibly drug-related – until the woman abruptly assumes a wide, unnerving smile and slices her own throat, ear to ear.

The incident understandably rattles Rose, but it is just the beginning of her disturbing tribulations. Soon she is seeing flashes of Laura’s leering visage everywhere, as well as other phantoms, all of them grinning that same, terrifying rictus grin. Rose’s confidants – including live-in fiancé Trevor (Jessie T. Usher), hospital supervisor Morgan (Kal Penn), and police detective ex-boyfriend Joel (Kyle Gallner) – become concerned about her increasingly frazzled demeanor and erratic behavior. Rose is sufficiently self-aware to appreciate that the menacing hallucinations and acute paranoia that she is experiencing are normally symptoms of schizophrenia and other psychotic disorders. This only heightens her sense of isolation, as she knows exactly how she sounds when she rambles to her therapist (Robin Weigert) about attracting the remorseless attention of a malevolent spiritual parasite.

The jaded second-guessing of horror movies is now so pervasive that viewers could be forgiven for assuming that a late-film twist is forthcoming, one in which the smiling entity is revealed to have been manifestation of Rose’s undiagnosed mental illness all along. The film touches on this notion – Trevor at one point accurately but rather callously points out that mental disorders have a hereditary component – but Smile never treats it as legitimate possibility. No, Rose is indeed being terrorized by a sinister supernatural presence, and the film's plot is focused on how her rational, materialist mind is compelled to accept this truth and ultimately to unravel the rules by which this entity chooses and stalks its prey. This neatly sets up a familiar investigative phase in the feature’s second half, as Rose traces Laura’s connection to another suicide victim, and that person to yet another victim, and so on. Not that this puts Rose any closer to truly defining the presence that is menacing her: It is too abstract to be considered a demon or ghost, but far too gleefully interested in her personally to be described as a coldly indifferent curse.

Strictly as a piece of horror-filmmaking craft, Smile deserves praise. Finn’s confident direction gives an arthouse tinge to the film’s mainstream trappings, and although his techniques might be familiar to the genre devotee – there’s that 180-degree tilt that contemporary horror films love so much – the effect is still potent. Smile is tense but fiendishly unhurried, luxuriating sadistically in its heroine’s crushing sensation of inescapable damnation. The somber lensing by Charlie Sarroff (Relic) and skin-crawling score by Christobal Tapia de Veer (The White Lotus) do a lot of the atmospheric heavy lifting, as does Dan Kenyon’s spectacular, remorseless sound design, which is replete with amorphous creaking, rustling, and scuttling. Aurally speaking, it’s one of the most distinctive horror films of the year.

Bacon does a solid job of making Rose’s unraveling feel credible, even if she does occasionally indulge in some over-the-top twitching and wailing. (There’s a particular pratfall through a glass table that is silly enough on its own, but the way that Pitt lingers on Bacon’s screeching reaction almost shifts it into camp territory.) Rose may not be a particularly pleasant protagonist, but viewers always knows where she’s coming from, and Bacon – who is in virtually every scene of the film – puts in the work to smooth out her disintegration from hyper-capable psychiatrist to jittery, hollow-eyed wreck. From her very first appearance, the actor bestows the character with a dry, hard edge, a whistling-past-the-graveyard intensity that suggests overcompensation for unhealed wounds. Which is fitting, given that Smile is unambiguously a film about untreated, unacknowledged trauma and how it can fester into an all-consuming rot.

Or something. Pitt’s determination to literalize the cyclical character of traumatizing violence prompts him to barrel forward in the name of creepshow spectacle, leaving the film’s not-metaphors ultimately feeling a little incoherent and undercooked. The mechanism by which the smiling entity jumps from victim to victim looks uncomfortably like the real-world problem of suicide contagion, but Smile doesn’t offer any real insights into this phenomenon or any other mental-health issue. Indeed, in attributing “out-of-the-blue” self-inflicted violence to a monstrous supernatural intelligence – and by peppering its screenplay with retrograde, ableist language – the film flirts with exploitation. Of course, if one is going to open that can of worms, then the entire horror genre probably needs to be re-litigated, going back not just to Psycho (1960) but to The Cabinet of Dr. Caligari (1920) and points beyond. Although that exercise might arguably be worthwhile, it is beyond the scope of this review. Suffice to say that Smile dances on the line between compelling and problematic in its depiction of mental illness, and individual viewers may react very differently to the troubling places it goes, depending on their own experiences and tolerances.

Smile opens in theaters on Sept. 30. 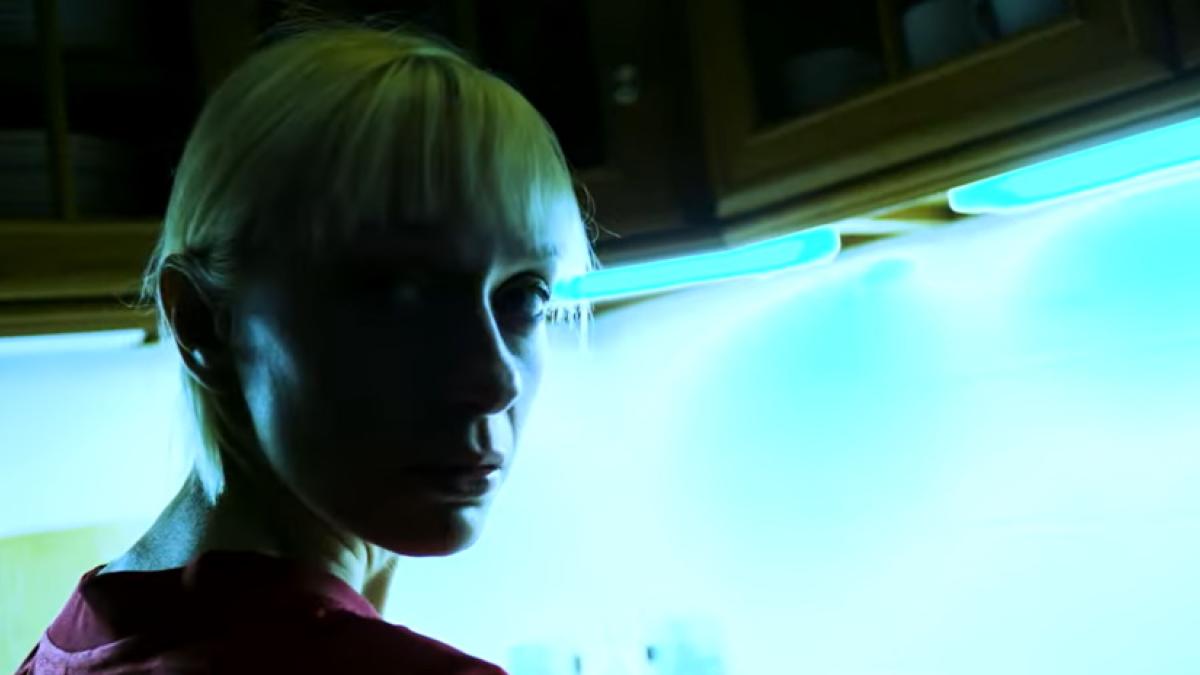