Revisionist cinematic interpretations of familiar myths and fairy tales have become commonplace, but few of them have looked, sounded, or felt anything quite like director Osgood Perkins’ wild take on “Hansel and Gretel.” The innovative horror filmmaker (I Am the Pretty Thing That Lives in the House, The Blackcoat’s Daughter) has recast the classic German folk tale – immortalized in the early 19th century by the Brothers Grimm – as a severe yet phantasmagorical allegory about growing up and letting go. Perkins also focuses this version on Gretel, who is not only listed first in the film’s title but has also been reimagined as a wary and wily 16 year-old who serves as a de facto caregiver for her 8-year-old brother. Unsurprisingly, Gretel & Hansel proves to be a distinctly feminine, psychosexual spin on this timeworn tale of lost children, tempting treats, and a wicked witch. Of course, most European fairy tales are already brimming with Freudian subtext, but Perkins and screenwriter Rob Hayes push these aspects to the foreground – without sacrificing their PG-13 rating or getting particularly icky about it.

Hollywood’s perennial attempts to turn children’s literature into dark, gritty franchise material have become kind of a running joke. However, Perkins’ film is a work of moody, measured art-horror, not the inaugural entry in a wannabe cinematic universe. (The last notable adaptation of this tale, the dire 2013 supernatural action flick Hansel & Gretel: Witch Hunters, was unquestionably in the latter vein.) That said, the most accomplished aspect of Gretel & Hansel is not the way it repurposes the broad strokes of a Grimm tale for its sober thematic purposes. What truly dazzles about Perkins’ feature – its entire raison d'etre, one might say – is its gloomy, eccentric style. Wandering in the autumnal twilight between the hyper-real anachronism of Tarsem Singh (The Cell, The Fall, Immortals) and the grimy, hand-hewn period realism of Robert Eggers’ The Witch (2015), Gretel & Hansel is a veritable feast for the senses. Mimicking the lavish, endless meals served up by the story’s witch, the film never seems to run out of sights (or sounds) to make the viewer gape with shivering wonder. It’s a Halloween-night psilocybin trip squirming with mythic symbolism: Whether it adds up to anything other than an exercise in pure style is debatable, but it’s unquestionably an experience to remember.

In a prologue that initially seems disconnected from the main story – but is, in fact, quite salient – Gretel (It's Sophia Lillis) recounts a fairy tale she often heard as a child. To save his infant daughter from a dreadful illness, a blacksmith bargains with a witch, who draws the pestilence from the child but also bestows her with a dark gift. As she grows, the girl evinces both a talent for prophecy and an unholy ability to manipulate minds. Her mother eventually abandons the girl in the woods, and the child thereafter becomes a kind of bogeyman, using her powers to lure playmates into her lair. This tale is a resonant one for Gretel, and not just because she also possesses some supernatural sensitivity to the unseen forces of the world. Gretel and Hansel’s father vanished some time ago, and their mother is half-mad with starvation and festering resentment. After Gretel indignantly rebuffs the lecherous inquiries of a prospective employer – thereby spoiling her impoverished family’s chance for an income – her mother tosses both children out of the house and advises them to throw themselves on the mercy of a far-flung convent.

So it is that Gretel and Hansel (Sammy Leakey) find themselves wandering in the wilds of the film’s austere, heightened vision of a never-was central Europe. At one point, the children encounter a kind-hearted hunter (Charles Babalola) who gives them a meal and tells them of a foresters’ sanctuary deep in the woods. Such benevolent meetings are the exception rather than the rule, however. Gretel is haunted day and night by visions of a little girl in a pointed cap – who may be the same magical child from the prologue – and her mounting dissociation is only enhanced after she and her brother eat some suspiciously florid toadstools to fill their rumbling bellies.

The rendezvous that changes the siblings’ destiny is just around the corner, however. Deep in the forest, they stumble across a curious house with a sharp-angled roof and little stained-glass windows that glow pumpkin-orange. Drawn inside by the smell of suckling pig and sweet cakes, the children meet the mistress of the household: a wizened old lady named Holda (Alice Krige) with blackened fingers and a peculiar manner. Her eccentricity is offset by her syrupy generosity, as she freely offers the children all the food they can eat and a warm, dry bed for the night. Guileless Hansel accepts this charity without a thought, but Gretel’s hackles are up. In her short but hard years, she’s learned that gifts are never given unless something is taken in return. As one night under Holda’s roof turns into two and then into a week, the crone wriggles her way past Gretel’s defenses with droll flattery, herbal wisdom, and intimations that she can help the girl unlock her mystic potential. Gretel can’t deny that Holda seems to have access to secret knowledge, but disturbing dreams and unanswered questions abound. Where is all the food coming from every day? And what is behind the secret door in Holda’s panty?

Hayes’ screenplay is a fantastically baroque beast, in which archaic turns of phrase jostle up against modern idioms. The characters speak with a cold frankness that sounds vaguely alien, as if this were a folk tale penned by David Cronenberg. Moreover, Krige delivers her lines in an odd-duck cadence that gives the dialogue a labyrinthine sensibility: lots of long, twisting passages and abrupt dead ends. Much as in The Witch – or in Eggers’ salty horror-comedy The Lighthouse (2019) – it takes a scene or two to modulate one’s ear to the film’s idiosyncratic linguistic style.

As delightful as it is to watch Lillis’ Gretel and Krige’s Holda verbally spar with one another – the former plainly outclassed by the latter’s cunning and magical power, but blessed with the furrowed resolve of youth – the real star of Perkins’ feature is its visuals. The film’s design is a mélange of 17th- through 19th-century touches and brazenly anachronistic fantasy, evoking a rich atmosphere that one might describe as “folk-Calvinist.” Cinematographer Galo Olivares and production designer Jeremy Reed – the latter a veteran of Perkins’ Pretty Thing (2016) – deliver a pageant of darkly mesmerizing visuals, drawing freely from German Expressionism, Hammer horror films, and the surreal visuals of transgressive 1970s European art cinema like The Devils (1971), The Holy Mountain (1973), and Salò, or the 120 Days of Sodom (1975).

However, except for some suggestive business with a wooden staff and a jar of magical ointment, there’s little in Gretel & Hansel that one could regard as shocking, titillating, or explicit. Even for a PG-13 horror film, it’s a relatively mild outing: The film’s graphic content mostly involves the liberal application of blood and offal in its nightmare sequences. Ultimately, Perkins is less interested in appalling or revolting the viewer than in establishing an unnerving atmosphere of wrongness. The jarringly modern score from Maniac (2012) and Revenge (2017) composer Robin Caudert – Philip Glass-adjacent work that’s rich in droning synth and eerie chimes – also contributes to this ominous, uncanny aura. Both the film’s music and its visuals signify that Gretel & Hansel is not unfolding in a specific place or time, but Once Upon a Time, when the world was smaller, wilder, and darker. Indeed, in Perkins’ hands, prosaic objects and recurring shapes bestow the film with an uncommon poetic density: triangles and pentacles; white sheets and bloody rags; a chessboard; an all-seeing eye; a rust-flecked axe and saw; vermilion smoke pouring from a chimney; a tree hung with hundreds of children’s shoes.

Although Gretel & Hansel is more stylistically audacious than anything Perkins has directed to date, it also feels oddly quaint and accessible. Gretel’s story might take a ghastly form, but at bottom it’s the tale of a girl learning to assert her independence and establish her own values. Particularly in its final stretch, the film adheres to a familiar horror-fantasy template: a dragon to be slain, a captive to be rescued, and the unquiet dead released from their suffering. Compared to the director’s brooding The Blackcoat’s Daughter (2015) – a pitch-black puzzle box that upends Satanic horror conventions to emotionally gutting effect – Gretel & Hansel almost feels respectable. Or as respectable as a film about black magic and child murder can possibly be. 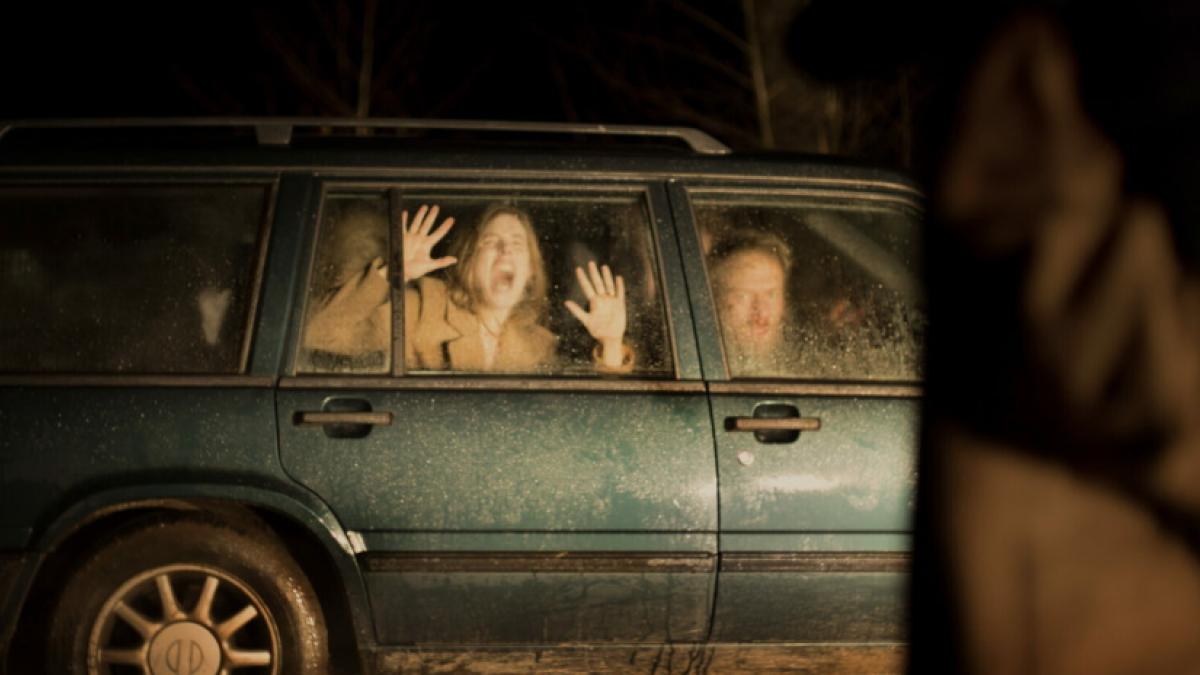 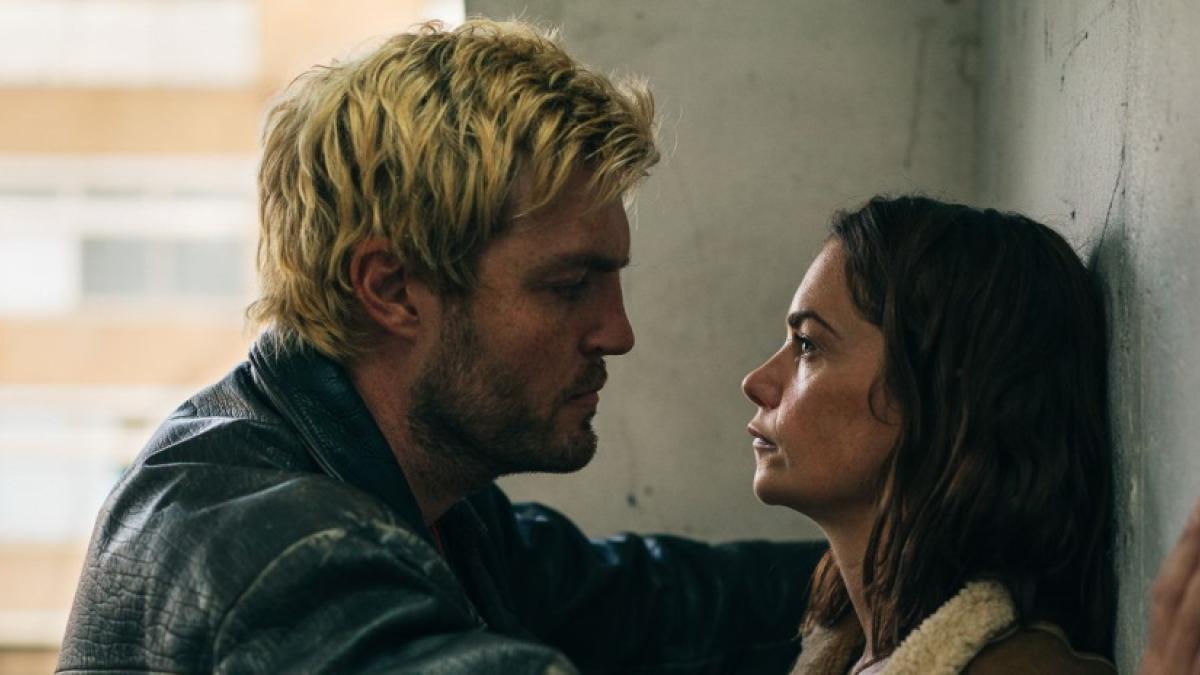 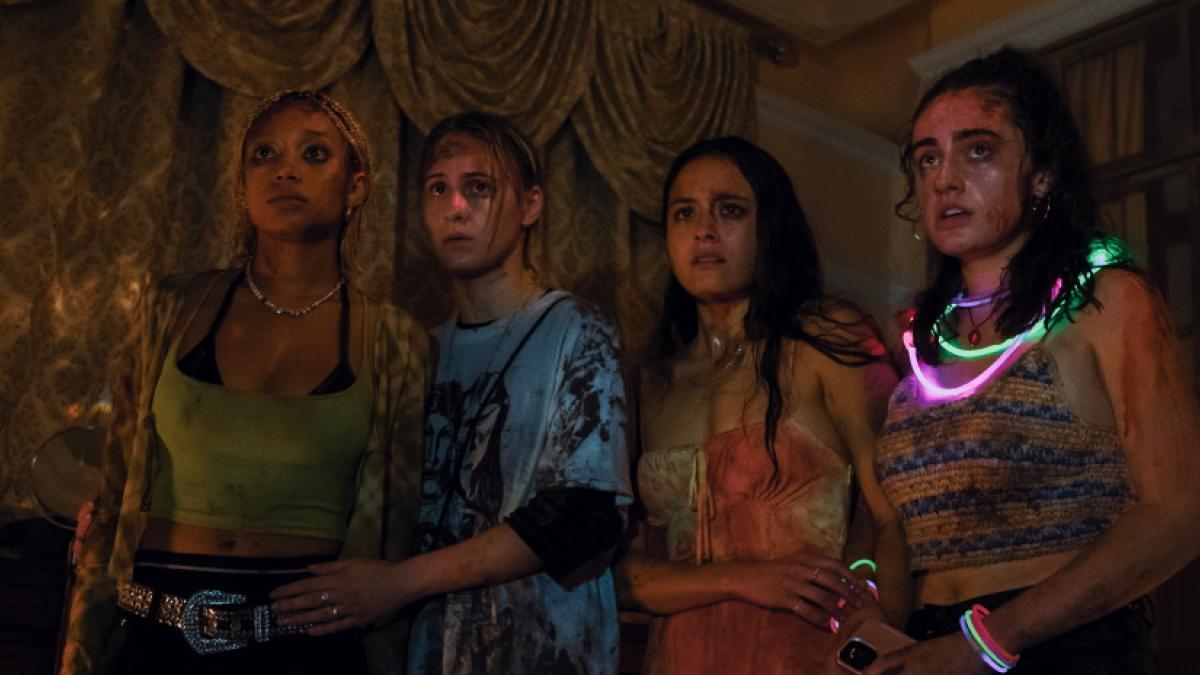