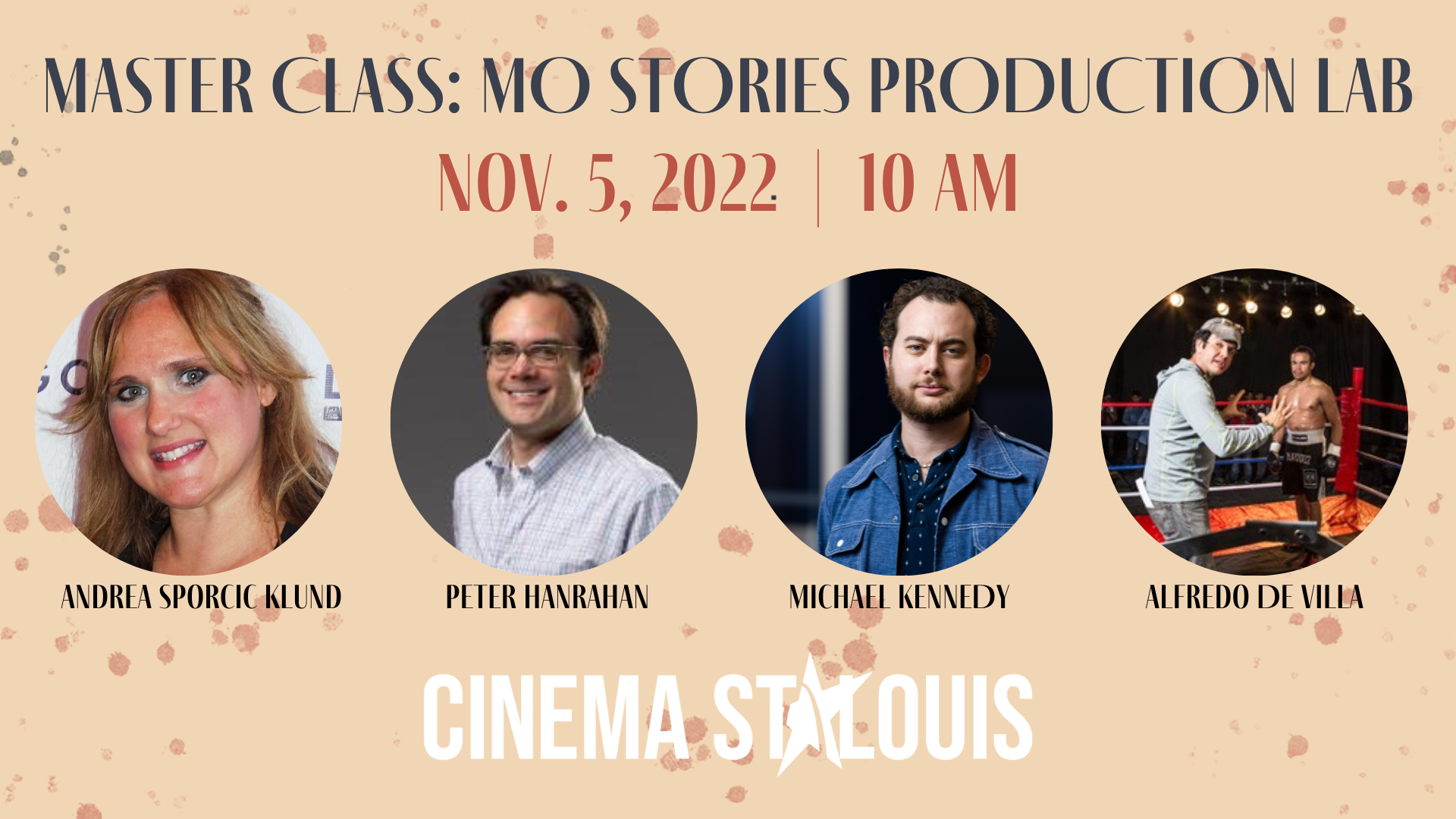 90 min
Watch for Free on Eventive

Missouri Stories Production Lab brings to life short films set in the world of winning scripts from the Missouri Stories Scriptwriting Fellowship. The writers participate as producers and experience all aspects of production. Completed films will be submitted to film festivals across the country to shine a spotlight on Missouri locations and talent. Andrea Sporcic Klund, head of the Missouri Film Office, will host a panel discussion with the writer/producers and directors of the latest St. Louis filmed project, “Assumption”: with writer/producer Peter Hanrahan, producer Michael Kennedy, and director Alfredo De Villa.

Andrea Sporcic Klund is the film commissioner for Missouri and runs the Missouri Film Office, which is a part of the Missouri Division of Tourism. She has been in the film biz representing Missouri for more than 20 years. Since 2005, she has worked to market Missouri to the film and television industry nationwide. Andrea has helped coordinate production logistics for more than 30 feature films and hundreds of television segments and series filmed all over the state, including the feature films “Up in the Air,” “Winter’s Bone,” and “Gone Girl” and the TV series “Sharp Objects” and “Ozark.” Before joining the film office, she spent eight years with Cinema St. Louis as director of operations. She holds B.A. degrees in theater and corporate communications from Lindenwood University. She has also acted, written, directed, and produced for the stage and screen.

Peter Hanrahan received his MFA in Playwriting from Rutgers University and graduated with a BA in English from Washington University in St. Louis (Phi Beta Kappa). As a playwright, he has had plays read, workshopped and produced with various theater companies, including the Arena Stage in Washington, DC, and his play “Prize Inside” was published in The Best Ten-Minute Plays of 2007 (S&K). As a working screenwriter, he has written and rewritten numerous scripts.  He also has several original screenplay projects in development, including The Lowlands, which is in pre-production with actors John Leguizamo and Alfred Molina attached. He placed among the top 30 entrants in the Nicholl Fellowship Competition, and he has written for television for NBC and the Discovery Channel. He lived in Los Angeles for many years, where he worked as one of two in-house Story Analysts for the United Talent Agency. He continues to serve as a consultant for UTA, as well as for Village Roadshow Entertainment. He writes for Script Magazine and serves on the Advisory Board of ScriptHop, an innovative software platform for screenwriters. He currently lives with his wife and two daughters in Saint Louis, Missouri, where he facilitates the Scriptwriting Program at Webster University.

In addition to "Assumption," Michael has produced several independent feature films including All Gone Wrong (2021) and Hungry Dog Blues (2022) both of which premiered at the St Louis International Film Festival in their respective release years.  He has also produced content for brands such as Spire, Panera Bread, BMW, LG Mobile, Carnival Cruise Line among many others, as well as docu-series for ESPN and MSG Network.

Alfredo de Villa is a Mexican American film director. He has directed fiction, documentaries, and TV commercials. His latest project, the series COOPER’S BAR for AMC Digital, was nominated for an Emmy in 2022; he executive produced the show and directed multiple episodes. On the spots front, he has most recently helmed campaigns for Meta/Facebook, Amazon Fire TV, and Microsoft. Previously, he has worked for such brands as Harley-Davidson, The Los Angeles Times, Chevrolet, Chrysler, Walmart, Comcast, Spectrum, Sprint, Oracle, AT&T, Carolina Herrera, Nestle, Kellogg’s, and Pepsi. An accomplished documentary director, he has directed several episodes for the sports documentary series WHY WE FIGHT (ESPN), which was nominated for an Emmy in 2020. He also directed TV episodes for WE ARE THE CHAMPIONS and HEIST (Netflix, both out in 2021), the entire season of ROUGH DRAFT WITH REZA ASLAN (Topic), and several specials/episodes for shows on Discovery, Fusion, CBS, and Universal. Alfredo’s Nothing Like the Holidays (with Alfred Molina and Debra Messing) for Overture Films recently got invited to be part of the Library of Congress film for preservation. His first film, Washington Heights (co-written with Pulitzer prize-winner Junot Diaz), premiered at the Tribeca Film Festival and was distributed by Lionsgate. His third film Adrift in Manhattan (Heather Graham, Billy Baldwin), premiered at the 2007 Sundance Film Festival. His most recent film Fugly (John Leguizamo and Rosie Perez) is based on Leguizamo’s successful one-man show.